Are you looking for a Teacup Pomeranian puppy to call your own?

Keep in mind that these dogs are only smaller versions of the Pomeranians.

They aren’t a separate breed on their own. Their personality and temperamental traits are still shared with the Pomeranian breed.

In this blog post, I will share with you all the information that you’d need about the Teacup Pomeranian dog breed!

So, without further ado, let’s just jump right in, shall we?

The Killer Looks and the Physical Features of the Teacup Pomeranian!

Teacup Pomeranians are really small in size and extremely cute to look at.

According to the AKC (American Kennel Club), adult Pomeranians that weigh 7 pounds or less are categorized as the ‘teacup Pomeranians’. These dogs usually weigh between 3-7 pounds which depends totally on the genetics.

Teacup Pomeranians have a short and compact body and have a soft yet textured double coat. They come in a lot of different colors and are rather furry and fluffy.

These dogs have a really long lifespan!

With a good and balanced diet and lifestyle, these dogs can live up to 12-16 years.

The teacup Pomeranian color depends totally on the breed history. They come in the following colors:

The pattern and color mixing of this dog’s coat also depends on the genetics.

Look-wise, these dogs are really adorable and cute! Also, they’re incredibly tiny so, you’d want to carry them around with you all day.

I recommend the following dog foods for this breed:

How Much Can I Buy This Cute Pup For? Teacup Pomeranian Price

Teacup Pomeranians are rather expensive as they’re quite popular.

You can get a teacup Pomeranian for as low as $500 and the price keeps going higher. The highest price for this dog is a whopping $4000!

Normally Teacup Pomeranian dogs sell for $600-$1500 and there are various factors that affect the pricing. Let’s take a look:

Some breeders try to sell teacup Pomeranians that aren’t purebred for a hefty price. So, I would recommend that you visit trusted and respected breeders only.

Travelling to the Past: Breed History of the Teacup Pomeranian Dog 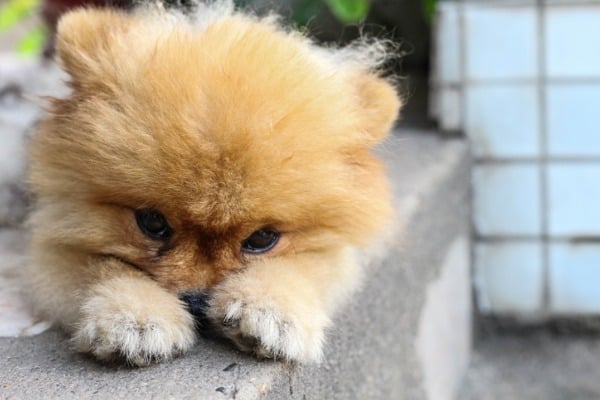 Did you know that the teacup Pomeranian is the descendant of a large sled dog breed?

This Spitz-type dog breed is named after Germany and Poland’s Pomerania region from where it originated.

These dogs are the descendants of the German Spitz dogs which is a large dog. This dog breed was popularized in the 18th century by royals such as Queen Victoria who owned a dog from this breed.

That’s how the dog breed gained widespread popularity in the world.

Ancestors of the teacup Pomeranian were working dogs of the Arctic areas that were larger in size. Pomeranians are Wolf Spitz type dogs as they have a sharp nose and muzzle.

This breed was registered by the American Kennel Club in 1898 and was recognized officially in the year 1900.

Personality Traits of the Teacup Pomeranian

In this section of the blog post, I want to share with you all some of the key personality traits of the teacup Pomeranian.

This is probably one of the most important things that you should know as they determine whether or not this dog is compatible with your lifestyle or not. 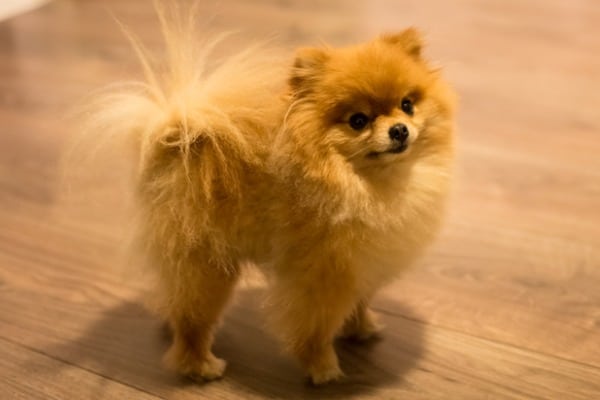 These little pups are extremely social and get along really well with other pets as well as kids.

However, they are territorial and protective as well. They need to be introduced to new people and they’ll mix up with them quite easily.

They have a good temperament and are patient with kids.

However, since they are really small in size and delicate little dogs, the teacup Pomeranians should be kept away from smaller children who can unintentionally harm them.

Pomeranians, in general, are known to be excessive barkers.

These dogs are very territorial and are highly alert. They bark at anything and everything and need to be trained not to bark as much.

They can be a nightmare for the neighbors!

These tiny dogs are quite vigilant.

This quality makes them highly trainable.

Housebreaking them isn’t very hard and these dogs can be trained to do a variety of things.

These dogs are adaptable and can live in larger houses as well as small apartments.

These dogs can live in a variety of areas—be it hot, or cold.

Harsh winters aren’t too much for the teacup Pomeranians to handle as their ancestors hailed from the Arctic regions.

Even though they come in a very tiny package, these dogs are very loyal to their owners and will do anything to please them.

Teacup Pomeranians will do everything in their power to protect you!
Cute, right?

These doggies are willful and have a mind of their own. They don’t like to be lap dogs and hold their own.

Each and every dog breed is prone to certain health issues and the teacup Pomeranian is not an exception to this rule.

Following are some diseases that affect this doggy:

Dogs with this condition have a cough which sounds like a goose honk. They may even faint and have an intolerance to exercise.

Teacup gained popularity because they have adorned the arms of some famous celebrities and public figures.

Let’s take a look at some of these celebrity dogs!

Teacup Pomeranians make good pets for celebrities and normal people alike because they are small in size, friendly, loving, loyal, easygoing, and adaptive.

These dogs were popularized in the 19th century by Queen Victoria herself and haven’t left the public eye ever since!

Summing Up: Everything There Is To Know About the Teacup Pomeranian Dog Breed

Teacup Pomeranians are tiny and furry little bundles of joy!

Teacup Pomeranians are the descendants of the large German Spitz dogs which share the pointed muzzle and nose with this breed along with other things.

These toy-sized dogs may come in a little package but, are very intelligent, extremely loyal, loving, caring, and friendly dogs. These dogs are adaptable and do well in large houses as well as smaller apartments.

However, these dogs, because of their small size should be kept away from children who can hurt them!

Still, have any questions? I’m here to answer them all in the comments section!

link to Red Jelly in your Dog’s Poop? I’ll Tell You What That Means!

Changes in stool and urine can be great indicators of what is happening in your dog's body. It can tell you if your dog is feeling constipated or even if they are nervous! But if you go to pick...

Continue Reading
link to How Many Times a Day Should a Puppy Poop? (How Often is Normal)

Raising a puppy is pretty exciting. There’s nothing quite like watching a puppy as he wiggles on over to you to give you some love and attention. It doesn’t come without its challenges,...