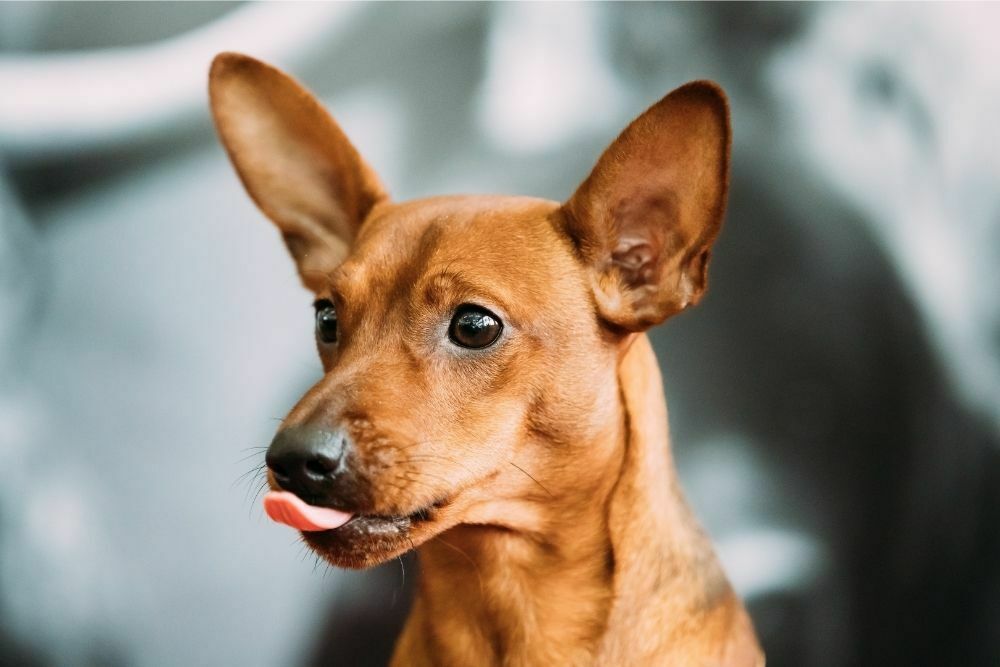 Contents show
1 At What Age Do Min Pins’ Ears Stand Up?
2 Do Min Pins Get Their Ears Cropped?

They do not. Miniature pinschers, with standing up ears, have had their ears cropped.

Natural miniature pinscher ears are fairly high on their head and quite close set. They tend to flop over around the middle of the ear, giving them an adorable puppy look even into adulthood.

During puppyhood, you’ll notice that the ears tend to go through periods of standing up and flopping over. This is normal and will eventually subside into the natural flop.

Some people recommend massaging the ears and rubbing them when the dog is young. This is said to help keep the ears supple and encourage them to flop over.

Unlike their larger Doberman relatives, miniature pinschers do not have fully folded ears. They have what is called ‘button ears.’

Unfortunately, min pins are more often than not seen with cropped erect ears. This is because until recently, breed standards required ear cropping. This meant that min pins with natural ears could not enter shows with floppy ears.

In Europe, many countries have banned ear cropping and their European breed standards allow for uncropped ears.

The American Kennel Club’ breed standards say that cropped or uncropped ears are allowed. However, they also mention that the ears should stand up from base to tip. This seems to be a bit of a contradiction as very few min pins have naturally erect ears.

At What Age Do Min Pins’ Ears Stand Up?

Well, as we’ve discovered, min pins ears do not actually stand up naturally. Therefore, there isn’t really an age by which you’d expect to see erect ears.

However, min pins do have natural button ears. This means that the top half of the ear folds over the bottom half. So, even without cropping, part of the ear does, in fact, stand up.

All puppies, regardless of breed, are born with folded over ears. This protects the inner ear from liquids and foreign objects in the womb. Once they are out, the ears should become a little bit more erect, but remain floppy.

You should be able to feel the cartilage at the base of the ear becoming harder at around 4 – 6 weeks. This is a sign that the ears are developing properly and is a healthy development.

If you’re buying from a breeder, you won’t generally get your puppy until they are 8 weeks old. This means that they should come to you with slightly stiff ear bases. 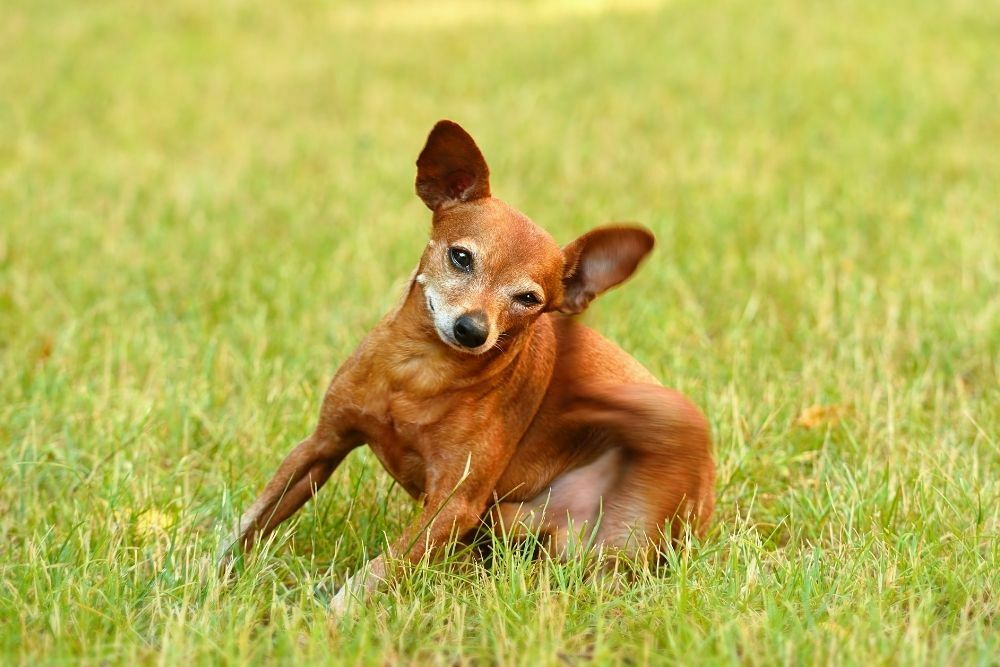 Between the ages of 8 weeks and 8 months, your puppy’s ears may go through lots of different configurations. Sometimes the ears will both be floppy, other times they may have one ear that sticks up.

These transitions can last anything from a day to a few weeks. Again, these are totally natural developments that show that the cartilage and muscles are developing normally.

Even puppies like min pins, who have naturally floppy ears, may go through periods of erect ears. Often it is just the muscles and cartilage trying to find the right position.

By the time your pup has lost all their milk teeth and gained all their adult teeth, the ears should have taken their final form. This usually happens between 6 – 8 months of age.

It is very uncommon for min pins to have naturally erect ears, but odd things can happen every so often. If your pup’s ears are sticking up, consider them a unique trait!

Do Min Pins Get Their Ears Cropped?

Ear cropping is particularly common with miniature pinschers. This is because the traditional breed standards have always specified that the ears should be cropped and erect.

The practice of ear cropping goes back centuries, but that is not an argument for the practice. In fact, it is the opposite.

When ear cropping first began, dogs were being used for hunting, fighting, or guarding. Often, these activities posed risks to the ears of the dogs.

Great Danes, for instance, were used to hunt boars. Their long, droopy ears often got bitten, snagged, or torn during the fight with the boar. As such, owners began cropping the ears to keep them out of the way.

This was seen as the lesser of two evils as cropping would keep the ears safe from injury and infection which could kill the dog.

In terriers and rodent dogs, ears and tails were cropped and docked to prevent rats, rabbits, and badgers from biting them. This was particularly important for breeds like Jack Russell’s terriers who went face-first into a rat nest.

In guard dogs, the tails were cropped, and ears docked to prevent assailants from grabbing onto these areas. This was the case for the Doberman Pinscher, a distant relative of the min pin.

Miniature pinschers were bred as toy dogs. In other words, they were not bred to hunt or guard, they were bred solely for looks and companionship.

Ear cropping was common in the breed because early owners thought it looked better and made them look like Doberman Pinschers. A connection that was encouraged to increase the breed’s popularity.

Today, ear cropping is banned or is in the process of being banned in many European countries. The process is seen as needlessly harmful and prohibitive to the dogs.

In the US, the process is still legal. It is recommended that you get a vet to crop your min pins ears between 8 and 12 weeks if you wish to do so.

There is an increasing number of veterinary practices that refuse to perform ear cropping. Despite this, you should not try to crop your puppy’s ears yourself.

link to Are Bearded Dragons Affectionate?

As bearded dragons are not as fluffy or as cuddly as cats or dogs, how are they affectionate? With cats and dogs, they show affection by licking our faces and cuddling up to us on the couch, but how...